Operation Marambio – He Who Dares, Wins!

Operation Marambio – He Who Dares, Wins!

A military operation, a Lockheed C-130 Hercules, 5-year-old Argentinian whisky, the harsh Antarctica climate, one crazy idea, three collaborators and now years‘ worth of patience, in 2022 a bold plan was hatched…

The Flight of Nestor Serenelli

The exact departure date for Nestor’s flight was uncertain and on several occasions, his hopes were raised and then dashed as scheduled flights were cancelled due to severe weather conditions.  The month of October saw little whisky production at the La Alazana distillery, as Nestor was left in a perpetual state of limbo waiting for an opportune weather window.  The whisky was emptied into transportation kegs, to be later transferred back into casks in Antarctica, and transported along with all of the equipment required for the mission to Buenos Aires in advance.

Finally, the weather window appeared and Lila, Nestor’s wife and partner in La Alazana, dropped him at the airport where he made his way to the capital to board a C-130 Hercules for the first leg of the trip to Rio Gallegos, deep in Patagonia.  He spent the night there and crossed to Camp Marambio, Antarctica, the following day.  Operation Marambio now entered its most crucial stage and time was of the essence upon landing.

Up against the clock, Nestor was given a strict 4-hour window to move all casks and barrels off the plane, empty the kegs into the wooden casks, pack up and have everything back on board for departure or face being stranded for weeks, possibly months in Antarctica…

Thankfully, with the assistance and logistical help of the Argentine military who went above and beyond their call of duty, Nestor was saved from being marooned at the bottom of the world and the threat of becoming the Antarctic version of Chuck Noland was averted.

Nestor, along with the Argentine military, offloaded the casks from the plane, siphoned the whisky back out of the kegs into the casks and stored them safely for maturation on the southernmost continent.  Before leaving, Nestor stencilled onto one of the casks the Rosewin Holdings logo, snapped a few photos and took a moment to take in the gravity of the history-making achievement and his otherworldly surroundings.

Nestor reported that in all his life he has never seen such a place, claiming there are no words to describe such extreme beauty – one must go to feel it. A desolate, harsh, beautiful landscape.   Frost and ice all over the land and a never-ending wind. He saw Penguins but not much else.

The plan is to make this an annual occurrence in the hope that the Antarctic environment and terroir will create the final frontier of whisky flavours available on this earth.  There are talks and plans of maturing the next casks in an ice cabin on another base much closer to the south pole where the temperatures range between -40 and -5 with average winter wind speeds of over 100mph.

It is a miracle that Operation Marambio happened so quickly.  Daniel Monk arrived in Argentina to visit La Alazana on 22 March of this year.  His initial interest was in their casks of whisky. As they chatted, Daniel shared with them his dream of maturing whisky on the Antarctic continent, with the view to creating a 7 continents whisky series.  As the Sereneli’s eyes lit up they made a promise there and then that they would find a way, no matter the obstacles, to achieve this goal.  Within 8 months of the seed being planted and with the help of the Argentine Ministry of Defence and Armed Forces the Serenelis have achieved the impossible and Mr Monk’s dreams of maturing whisky on all 7 continents have been made a reality.

This is a true example of how collaborations and partnerships help each other grow, an example of Napoleon Hills‘ ‚3rd mind’ concept.  How a harmony of power is created when a group of people come together with a definite purpose.  Whatever anybody’s dreams are right now we can all achieve them with action.  The Serenelis landed on their Marambio.  We can too.

The operation was the combined efforts and planning of Nestor and Lila Serenelli of La Alazana, Argentina’s first and only whisky distillery, Daniel Monk, founder and MD of Rosewin Holdings, an independent bottling company investing in premium new world whisky and current holders of the Guinness World Records largest bottle of whisky called ‘The Intrepid’, and the logistical support of the Argentine Ministry of Defence and Armed Forces. 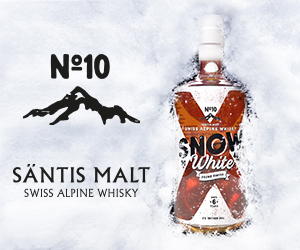